The Cuban artist Alexandre Arrechea took inspiration from the past when conceiving “No Limit,” a show of 10 site-specific metal sculptures that will be on view March 1 to June 9 along the Park Avenue medians from 53rd to 67th Streets. Each sculpture is based loosely on a New York architectural landmark: the Chrysler Building, the former Citicorp Center, the Empire State Building, the Flatiron Building, the Helmsley Building, the MetLife Building, the Metropolitan Life Insurance Company Tower, the Seagram Building, the Sherry-Netherland hotel and the Thurgood Marshall United States Court House. The tallest will rise 20 feet.

“This project has been entirely designed for Park Avenue,” Mr. Arrechea said. “I’ve picked buildings like the Seagram Building or MetLife that define the city and define Park Avenue.”

Presented by the Magnan Metz Gallery in Chelsea, together with the city’s Parks and Recreation Department and the Fund for Park Avenue’s sculpture committee, the installation is Mr. Arrechea’s first public art exhibition in New York. While most of the sculptures retain some of the buildings’ most recognizable features, they often meld new forms and sometimes even moving parts. His Citicorp Center has a spinning top, a metaphor for the fiscal crisis; his Flatiron is literally flat, and while the outline will be obvious, it will be flying on a flagpole, set on ball bearings so it moves with the wind.

“Some of the sculptures appear to be almost dancing in front of the buildings,” Mr. Arrechea said. One in particular does not obviously reflect a building. At first glance this work, in front of the Seagram Building, seems to be a straightforward fire hose wrapped around a bright-red spool. But unraveled, the hose begins to abstractly resemble that International Style landmark. 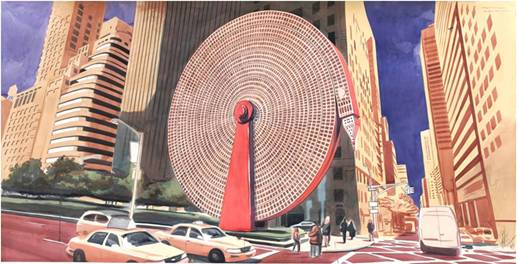